Since the dawn of cinema, our favourite movie characters have influenced the clothes we wear and the jewellery we buy. Fashion and film go hand in hand with many designers and trend-setters drawing inspiration from the movie world and vice versa. Costume design isn’t just about choosing a character’s outfit. Everything from a pair of old pants to a turned up collar can form and evolve an audience’s perception of a character, what they want to hide and what they want to reveal. Jewellery’s no different.

So, with that said, let's take a look at 7 Romantic Films & Their Iconic Jewellery

In the novel, Daisy is described as beautiful, charming and immaculately dressed - characteristics that she most certainly uses to her advantage. Protected from reality since childhood, Daisy is “void” of responsibilities and so prone to dismissing the terrible consequences of her actions. In Baz Luhrmann’s adaptation of The Great Gatsby, Carey Mulligan (as Daisy) was given the same angelic style wardrobe as Mia Farrow in the 1974 version, although this time her jewels have a lot more sparkle.

Luhrmann wanted to convey the excessive nature of the 1920s' upper class without any restrictions. Layered pearls, both fake and real, were the go-to accessory during these Chanel influenced years, and Daisy’s pearl art-deco finger bracelets – specially made by Tiffany & Co. - are as decadently breath-taking as one of Gatsby’s parties.

It’s been ten years since anti-romcom 500 Days of Summer hit the screens and people are still upset over Summer dumping Tom. But aside from the film’s charming script and cast, Summer’s wardrobe is by far the most talked about thing in the movie. Her winged-eyeliner, relaxed hair-dos and 50s get-ups (no jeans in sight) are enough to make you want to hit the vintage stores and spend 20 big ones on midi-skirts. Costume designer Hope Hanafin wanted to complement Zoe Deschanel’s distinctive blue eyes, so gave her a wardrobe that consisted almost entirely of different shades of blue. What’s more, each shade reflects the mood of the segment it's worn in. But good news! Summer’s garms are more budget than high-end because Hanafin didn’t want to put the character in any outfits she wouldn’t have been able to afford.

Summer wears a blue butterfly brooch paired with a white collar shirt to her first day at the greeting card company (this is also the first time she’s introduced to Tom). The jewel brings colour to the office, as well as her outfit, and indicates her need to escape monotony. What’s more, the insect comes to symbolize Tom’s future perceptions of Summer: beautiful yet unattainable.

Tiffany Maxwell, played by Jennifer Lawrence, is a sex-crazed widow suffering from depression. With Tiffany, screenwriter and director, David O. Russell, took the female-lead archetype and flushed it down the toilet. Tiffany was initially supposed to be a goth with jet-black hair but sadly her look was toned down before shooting - Lawrence was given brown locks and a virtually all-black wardrobe instead. Of course, the character’s outfits were a huge fashion hit and left many fans wondering where they could find replicas.

When Pat is first introduced to Tiffany, she is wearing a black cardigan, black nail varnish and a gothic crucifix necklace embellished with black stones. This gives her an almost stand-offish appearance, but later, for the dance competition, Tiffany wears all white which perhaps conveys the mental clarity she gets from doing the things she loves.

Set during the American Civil War, Gone With The Wind captures mid-19th-century fashion to a T. Filled with impossible to walk in hoop skirts, slanted shoulder necklines, patterned dresses plastered with frills and ribbons and intricately adorned jewellery, the film is famous for its costumes as much as anything else. Scarlett O’Hara’s outfits stand out the most and reflect her bold personality as well as her social position. When her first husband dies in battle, she wears a black high-neck dress that covers her up from the neck down. And when Scarlett returns to a ransacked home, Mammy sews her a gown using her mother’s green velvet drapes - the dress is Scarlett’s attempt at maintaining her family’s reputation, even if it means only looking the part.

When we first meet Scarlett at Ashley’s barbeque, she is wearing a coral necklace and a white lace dress with a leafy print. This outfit is far more youthful than those worn later – which is perhaps indicative of her naivety, before death, heartbreak and responsibilities take over. However, it can be argued that O’Hara never fully grows up and even in adulthood continues to live a sheltered life.

The teen queen of ultra-cool granny style, Andie (played by Molly Ringwald) is a fan of thrift store layers and costume jewellery. Along with her bulky rings and earrings, Andie wears a variety of antique style brooches and necklaces. Together with the character’s iconic Peter Pan collared shirts, her cheap accessories go from looking like tat to treasure.

In an interview for Fast Company, Pretty in Pink’s costume designer Marilyn Vance mentioned how Andie’s low-income homelife dictated her wardrobe: “There’s a scene in the movie where Andie’s looking around for a prom dress. You see her outfit there—she’s actually wearing a little jumper under that patterned dress, which we made because she put that outfit together herself and this is how she was perceived. She couldn’t keep up with those other girls, there was no way.”

With her floral print attire, bowler hats and eclectic jewels, Andie’s style is courageous and inventive (even by the 80s’ standards) and continues to influence fashion today.

In 2005’s Pride and Prejudice, Elizabeth Bennet’s dresses are far less elaborate than those worn by the character in earlier adaptations. Costume designer Jacqueline Durran based the Bennet family’s outfits on their provincial heritage and economic situation (despite being gentry). Rather than have them wear the latest trends of that period, she put them in clothes that were more in keeping with their rural lifestyle. Additionally, the Bennet sisters rarely sport jewellery or flamboyant accessories - another design choice made to simplify their image. Director Joe Wright supports this vision in a 2005 interview for IndieWire: “For a start, I like messiness. I think messy is beautiful. I think tidiness is ugly and so that’s just my aesthetic. Through my research, I also discovered that life was pretty dirty in those days. It wasn’t all clean and pristine.”

Elizabeth’s clothes are darker in tone and more practical than the dresses worn by her sisters and her hair is rarely in place. However, at the Netherfield Ball, when she dances with Mr Darcy, Elizabeth’s look is formal and unusually feminine (in those days, it would have been necessary to smarten up for such an event). Her pearl hair adornments are sprinkled messily around her head, a do that became popular amongst brides for years to come.

Arguably, both Quentin Tarantino’s best screenplay and Tony Scott’s best movie, True Romance, has it all, and the costumes ain't too shabby either. Putting aside Alabama’s and Clarence’s iconic looks (yes, I’m talking about the fuchsia leopard print leggings and the Hawaiian shirt), their Detroit outfits are some of the most memorable. From the offset, the couple is draped in pinks, reds, electric blues and, in Alabama’s case, leopard print. It’s a romance, after all, and the protagonists’ wardrobes are as spontaneous as they are.

On her wedding day, Alabama wears a crimson velvet dress with a sweetheart neckline (it’s also the dress she’s in the night before when she “bumps” into Clarence) with a pair of matching heart dangle earrings. Later, in sunny LA, she swaps reds for vibrant pinks and dons a pair of sky-blue heart earrings - colours that accentuate the beachy landscape. Hearts + Romance = you do the math. 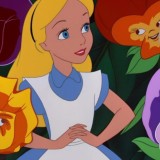 Comments will be approved before showing up.

Also in The Silver Lining

We delve into the outfits and jewellery of three of America's most notable First Ladies. If you want to know the stories behind Jackie Kennedy's pearls, Michelle Obama's costume jewellery and Hillary Clinton's gold charm bracelet, then you've come to the right place.

No doubt, actress Alicia Vikander knows good jewellery and how to wear it. We list the top 7 earrings worn by Vikander on the red carpet, including pieces by Bulgari, Louis Vuitton and Ana Khouri. And we've also added some incredible lookalike earrings that won't break the bank.

Inside the Mind and Jewellery Box of Carmela Soprano

Last week marked the 20 year anniversary of the legendary HBO series, The Sopranos, and so what better time than now to focus on the critically-acclaimed character of Carmela Soprano and, of course, her drool-worthy jewels.

Once an item strikes your fancy, consider the purchase-click your final concern. Shipping in the UK is on us!

Sign up to get the latest on sales, new releases and more …